Animal lovers can understandably become overwhelmed by the suffering of animals and the amount of work that needs to be done to alleviate that suffering. So, it's worth taking time to reflect on some of the success stories, of which there are many.

We feature a few of Save-a-Pet's rescue and rehabilitation stories below. Some of these stories are still in progress, so please visit this page again for updates. 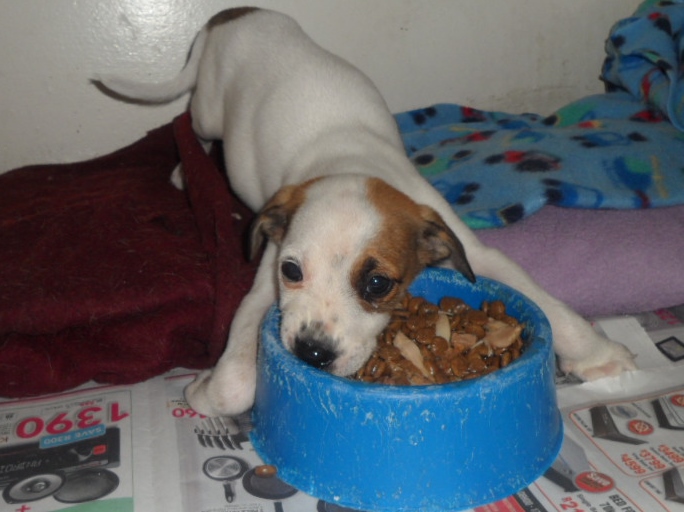 Katie Bell is a puppy that came to Save a Pet from the Mission Road Informal Settlement in September 2016 with really bad Rickets and barely able to stand.

Katie Bell went into foster care with a long-time Save-a-Pet supporter, Helize du Toit, and with proper medical treatment, nourishing food and loads of love, she made a wonderful recovery.

UPDATE:  Katie joins the ranks of "foster-failures" and was adopted by her foster mom.  What a lucky girl! 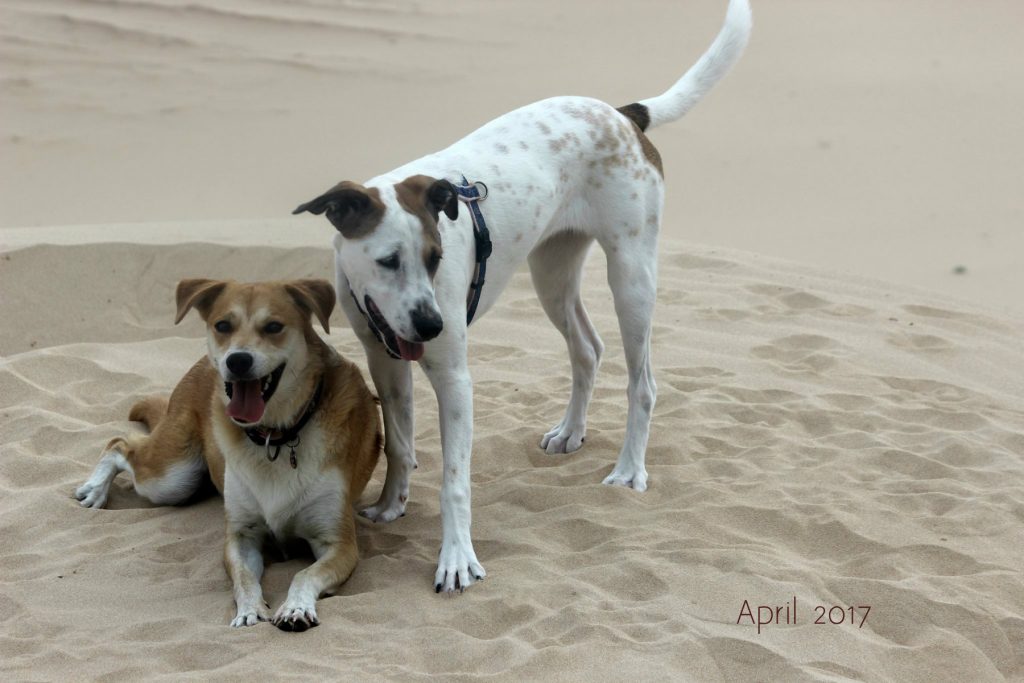 Iggy was confiscated from some squatters when he was about 6 months old. He was very thin, full of worms, mangy and filthy. Thanks to our supporters Iggy received medical treatment for his ailments, good food and lots of love at Save-a-Pet.  He has recovered well and would so much like his very own forever home. 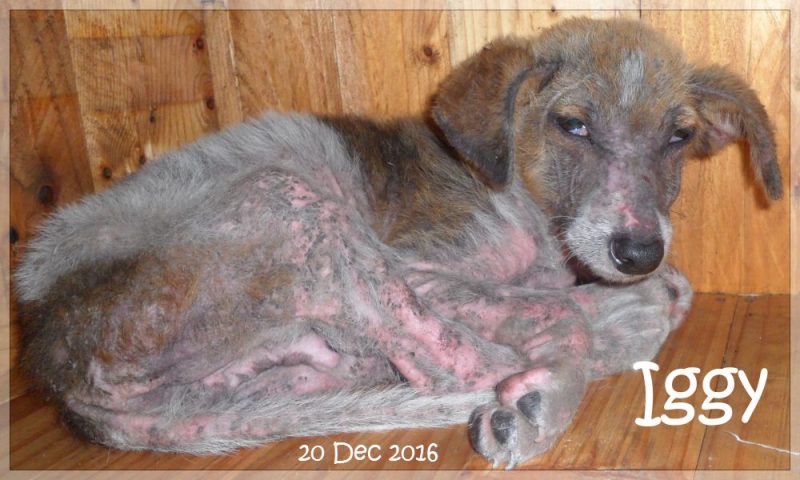 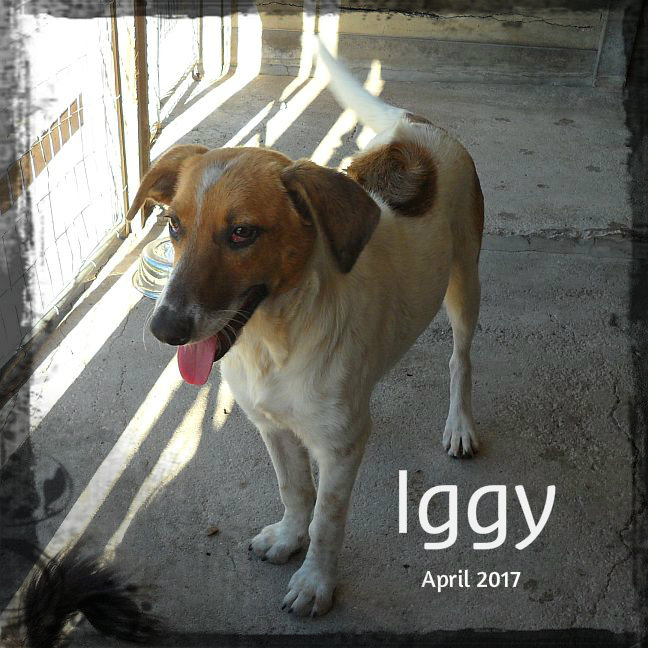 3 September 2015 - Evelyn and Emily are two of Save-a-Pet’s latest rescues. They are sisters that come from the Mission Road Informal Settlement.

Evelyn had terrible bite wounds all over her face which had become infected and formed a big crust covering her whole face. She also had mange on her little body. She spent a week at Vets Incorporated before continuing her recovery at Save-a-Pet.

Emily was also in bad shape, but not as bad as Evelyn. Emily had very bad mange covering her whole body. Both these girls were about 5 months old at the time.

8 October 2015 - As the pictures show, good food, lots of love and the appropriate medical attention have made all the difference in the lives of Emily and Evelyn.

Thank you to everyone who made this possible! 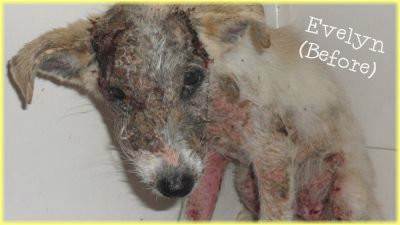 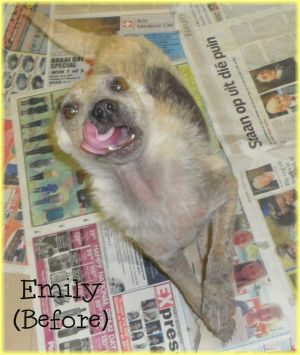 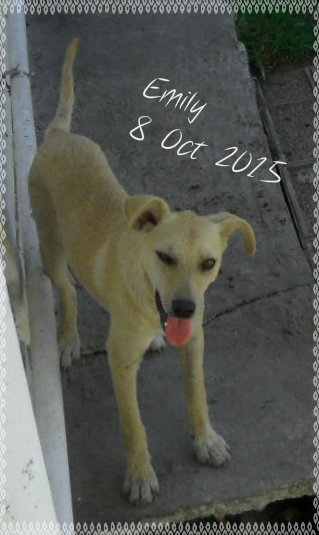 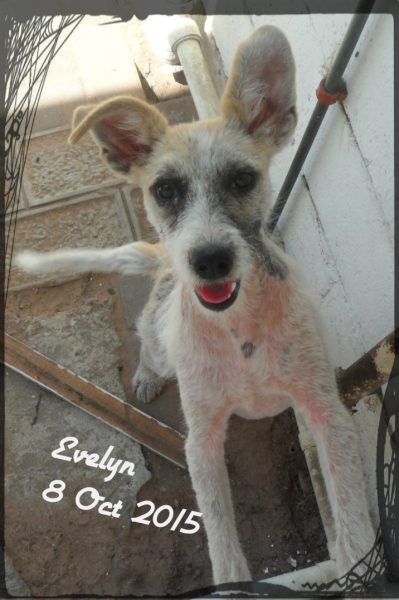 UPDATE: Grace and Gabriel were adopted together in 2018.

3 September 2015 - Gabriel and Grace came into Save-a-Pet on the 3rd of August, 2015. They were found living in the bush along the Uitenhage Road.

The two of them had terrible sarcoptic mange. 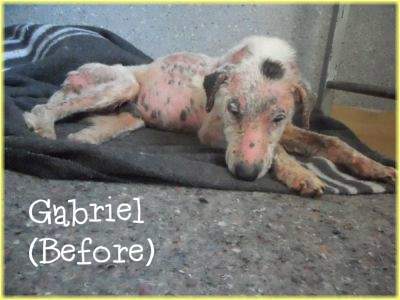 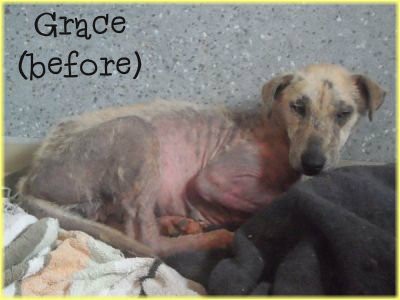 We started treatment immediately and an improvement was seen very quickly. 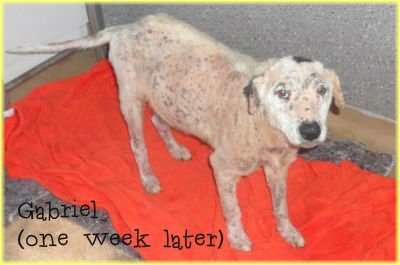 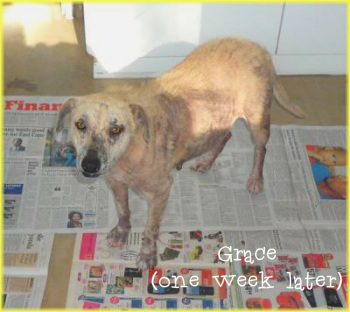 They went from these two dogs that were too itchy, sick and starved to move, to two bouncing balls of joy that wag their tails like mad when you walk in the room. 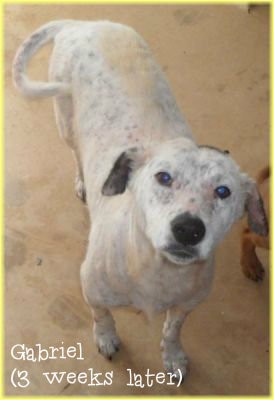 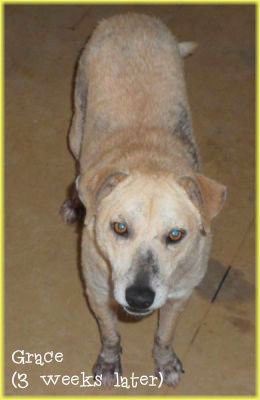 Gabriel and Grace still have a long road to recovery ahead of them, but they are responding well to treatment and appear to be so happy for being given a second chance. 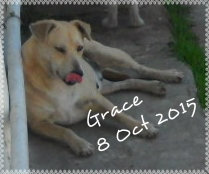 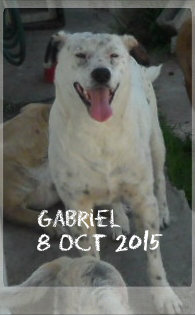 8 October 2015 - Just two months after arriving at Save-a-Pet looking the picture of misery, Gabriel and Grace are doing really well - as can be seen in these pictures. 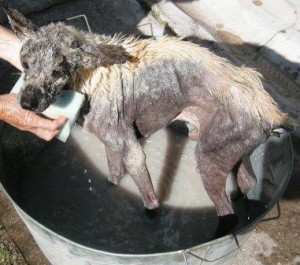 Jonty was found in a terrible state at an AIDS orphanage in Port Elizabeth. He was virtually bereft of hair, mangy and starving. He was bathed then fed immediately on his arrival at Save-a-Pet. Note the look in his eyes that day. 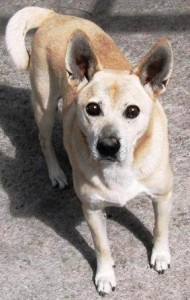 Six to eight weeks later he was unrecognisable to many who hadn't seen him since his arrival. He had become another rescue success story and a tribute to the Save-a-Pet volunteers who nursed him back to health. Look at those eyes now!

A lovable dog, who sadly passed on during 2009. He had a number of kennel mates who arrived after him yet were adopted before him.

The Story of Max

November 30th 2005. It was my last day at work at Volkswagen Uitenhage and I had hoped that after 22 years service, followed by a 4-month contract, I would be able to leave around lunchtime after tying up all of my “loose ends” and having said my farewells to my colleagues. It was not to be.

I eventually managed to leave at 3.00 p.m. and drive my usual route home to Kabega Park from Uitenhage (Old Uitenhage Road, Booysens Park, Standford Road, Mission Road and Cape Road). It was whilst travelling down Mission Road I spied a dog running in and out of the road some distance in front of me immediately opposite the entrance to the gravel pits. A woman in a BMW 5 Series slowed down and tooted her horn at the dog and he moved back to the side of the road. Then it was my turn.

I slowed down to look at the dog but with a lot of fast moving traffic behind me I drove on noting as I passed him that he looked in a terrible state. Realising that I couldn’t handle the dog on my own, I sped home to my wife Barbara, changed my clothes, ready for perhaps a messy excursion into the bush, collected a towel, a dog box, some dog food and dog biscuits. 15-20 minutes had elapsed by this time. We started out on what I thought would be a fruitless journey as I was sure that if I found him he would be dead on the side of the road somewhere, then I realised my car was into my fuel reserve and if I was to chase a dog over “hill and dale” I had to get some fuel first. So another 5-10 minutes went by.

It’s now after 4.00 p.m. and we are driving back along Mission Road heading for the gravel pit entrance as our first port of call at the same time being vigilant in case he has doubled back towards Cape Road. I asked a truck driver leaving the gravel pit if he had seen a stray dog around. Negative, so we push on slowly in the direction of the S.A.N.T.A. Hospital. No sign of him. Then suddenly, we spot a dog on the road ahead of us. It must be him and as we approach I recognise him as the “scruffy individual” I had first seen on my way home from work.

We pulled up in front of him and tried to coax him with a dog biscuit but he seemed wary of us. So much so that he continued to wander on and off the roadway with lots of traffic whizzing by, blasting their horns with no concern at all for us or the dog. A car pulls up on the opposite side of the road and “Surprise! Surprise!” it’s Ian and Amanda – my old lift club members with whom I had ridden with to work for some years and for the last time the previous day. 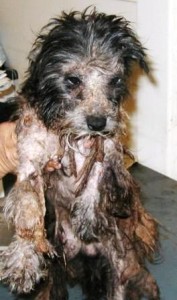 Ian assessed the situation pretty quickly and wound down his driver’s window to call the dog at a suitable break in the traffic. The dog responded to his call by rising up on his back legs wagging his tail. Ian opened his driver’s door and “blow me down” if he doesn’t jump into the car and onto his lap! I immediately opened up the boot of my car to get the dog box ready to receive the poor animal. I dashed across the road and took the dog from him through his open driver’s window and dashed back across the road to put him securely in the dog box. We said our "thank you’s" to Ian and Amanda and took the dog directly to Save-a-Pet Animal Rescue Centre near Greenbushes. (The next day I spoke to Ian about the incident and his main comment referred to the fact that the dog “stunk to high Heaven” but he was a friendly dog all the same).

Barbara and I arrived at Save-a-Pet within 10 minutes. Wendy Banks of Save-a-Pet took the dog out of the box and placed him in a quiet room to assess his health and demeanour. “Take a photograph”, she tells me and then I realised that in rushing out to rescue him I had left my camera at home. It was important to get a picture of him “as found” as Save-a-Pet would later be able to show the difference in the dogs condition after approximately 2 months of treatment. So I dashed home again to get my camera and returned to Save-a-Pet to take his “Before” photograph (see picture on the lef 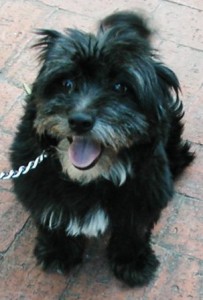 t). I wanted to name him Mack after Ian McIntyre but had to change it to Max as there was already a dog in the kennels named Mack. So Max it was.

Since that fateful day – it was fate that prevented me from leaving work for the last time at lunchtime and fate that led me to this poor lost wretch of a dog – Max has been bathed and shaven, his hair was badly matted and in ringlets (Rasta style) and he did "pong" a bit.

He was dipped every week to treat his mange, for which he has also received oral medication. He turned into a wonderful little chappie who had only one problem……He needed a loving home to complete his rehabilitation. Well, Max was homed in August 2006.

Max’s story is one of many similar stories that have developed during the time I have been a Save-a-Pet volunteer. Another new dog off the Save-a-Pet “assembly line” but certainly not second hand. Had Max been taken elsewhere in his state, he would probably have been euthanized almost immediately. He was one of the lucky ones who came to
Save-a-Pet. We received a call that there was a sick looking long-eared dog running around near Hunter's Retreat Spar. A lady had tried to feed it but it ran away and she lost it. As my wife and I lived nearby we went to look for the dog but after some considerable searching we could not find the dog anywhere. 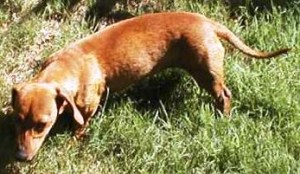 The next day Rose Connell's Dog Control Dept was called to look for the dog and soon found her (a young dachshund) hidden in a rosé wine box behind the pub opposite the Spar. They brought her to Save-a-Pet and we named her Rosé from her chosen wine box! She was suffering from mange and had obviously been "on the run" for some time.

Six weeks later she was well enough to be homed. The transformation was complete. Another successful rescue and rehabilitation. It really makes one feel good to witness the transformation.